First time unemployment claims decreased by 6,000 over those reported last week.  Last week's claims were revised upwards by 5,000.  The four-week moving average decreased 750.  As a whole, claims have been stable this spring, but they have tended up very slightly over the past three months, with slight upwards revisions in the last six of seven weeks.  Four week averages have increased from 383,000 in April to 387,000 now in June.


As usual, to put this into perspective, check out the red line on the chart below to see where jobless claims are now, in spring of 2012, compared to spring of the past three years.

The initial claims as announced last week were 387,000, so the claims from that week were revised upwards by 5,000. 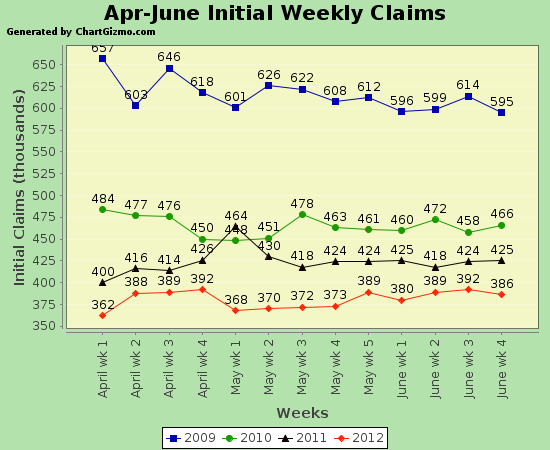 As a whole, the current numbers of initial claims continue to be the lowest springtime initial claims numbers since 2008, as can be seen on the chart above.

Any questions or confusion, please leave a comment or email me!
Posted by Middle Molly at 8:11 AM