But Jobseekers to Jobs rise to 3.66 Jobseekers for every job after reaching a post-recession low of 3.39 last month.
This morning the Bureau of Labor Statistics released the JOLTS report (Job Openings and Labor Turnover Survey) for the month of April 2012.  This report always runs a month behind the regular monthly Employment Situation Report.
While this month shows a drop in job openings and hires, both of these numbers are higher than they were a year ago, and we continue to have more hires than we have layoffs and separations. 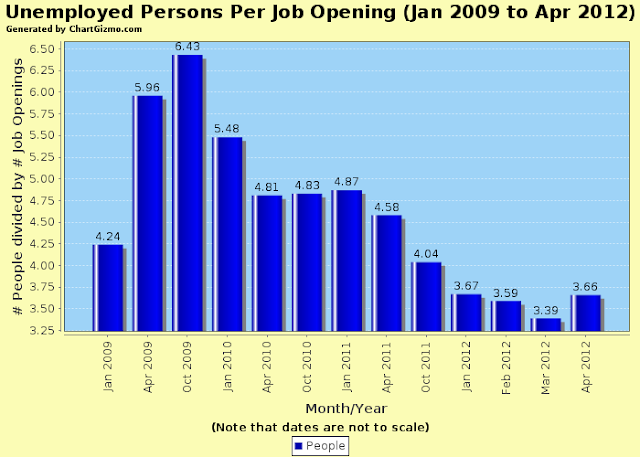 The average number of job openings this year has been as high as that in early 2008, and it has been trending upwards, despite some dips and trips.  It now stands at 3,400,000.  (We had over 4 million job openings each month during 2006 and throughout most of 2007.)

The monthly employment report for April  2012, showed 12,500,000 people officially unemployed.  Divide that by the number of job openings on the latest JOLTS report (for April 2012), which is 3,416,000.  Voila.. we have a jobseekers-to-jobs ratio of 3.66.
Why is it good that people quit?
The number of people quitting has climbed over the past half year and now equals the rate of late 2008.  That  either means that people already have a new job lined up or they are confident that they will soon get one.  That's always a good thing for the labor market as a whole.
The Numbers:
Best Regions for Job Openings and Hiring:
Best Industries for Job Openings and Hiring:
Most separations?
Read the whole report HERE.
Posted by Middle Molly at 8:55 PM