Four Years of Unemployment Benefits? What's That About?


Why are we giving people FOUR years of unemployment benefits?  Isn't it time to stop?

(Note:  This is an update based on an article I wrote two years ago.)

NOBODY IS GETTING 4 YEARS of unemployment benefits, no matter what someone has told you about his ne'er-do-well brother-in-law.

The extension that was passed as part of the fiscal cliff deal assures that people who were laid off in late 2011 or 2012 have some extra weeks of benefits.  Again, with the exception of Alaska, nobody is getting more than 73 weeks right now, and people in most states are getting AT MOST 50-60 weeks.


Have there ever been more than 99 weeks of unemployment available?

No.  Not in the United States.  I've heard of stories from people who claim that they got some kind of disaster unemployment on top of regular unemployment after 9/11.  I've also read that ex-military might get some extra weeks,  but I haven't seen any confirmation of that situation.

Right now (as of March 2013) the maximum available number of benefit weeks is 86 weeks in Alaska and seventy-three weeks in 7 other states or territories.  All other states and territories get fewer than 73 weeks.The number of weeks depends on the state unemployment rate and specific state laws.  The number of unemployment weeks changes fairly frequently.  CNN has a map on their site, but it is not up-to-date.  The map below, from    this page at the Center on Budget and Policy Priorities, appears to have accurate, up-to-date data on the number of weeks available in the various states: 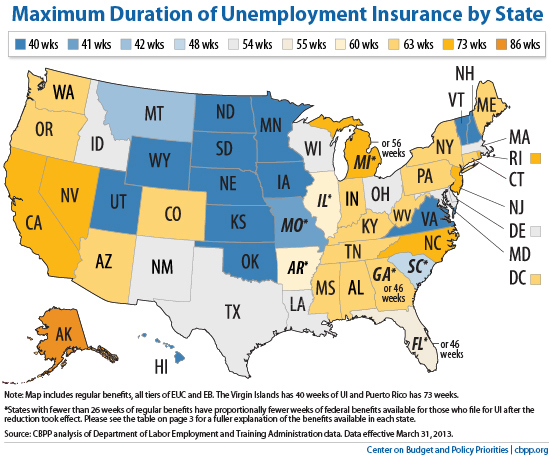 Here's another article that answers the question: How Many Weeks of Unemployment Will I Get?

Here are some answers to comments and questions that I've heard repeated over and over: