Weekly unemployment initial claims increased for the third week in a row.  Unemployment claims have increased three out of the last six weeks.

First time unemployment jobless claims increased to 385,000  for the week ending March 30th.   This is a relatively large increase of 28,000; also the week's claims numbers are higher than they were last year in seasonally adjusted numbers.  However, the Department of Labor also readjusted seasonal adjustments with last week's report and the unadjusted "raw" number of people who filed for first time claims is low, only 314,016.  It's really too soon to tell if this week's claims numbers have any meaning other than the usual weekly volatility; however,  this is the highest number of weekly claims since November, when Hurricane Sandy significantly impacted unemployment data.

The four-week moving average # of claims increased by 11,250 last week after increasing by 2,250 last week.  First time claims continue at about the same level that they were five years ago, in early 2008.

For the week ending March 16th, 5,288,614 people were receiving unemployment benefits under one of the programs that are available (regular state, federal extended unemployment compensation, or a few other smaller programs).  This was a decrease of 167,165 continuing claims since the previous week.  The decrease in continuing claims occurred in both the  Federal Extended Unemployment Benefits program (the "Tiers") as well as claims in the Regular State program (the first 20 to 26 weeks of unemployment benefits).  Claims in the "tiers" decreased about 58,000 whereas claims in the Regular State program decreased about 106,000.

Percent of Unemployed People Receiving Benefits decreased to about 44.8% for the week ending March 16th. 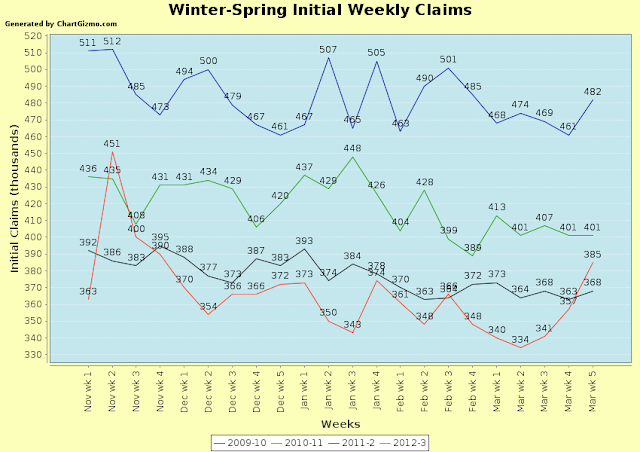 First time unemployment claims increased by 28,000 over those reported last week.  Last week's initial claims numbers were not revised.  There are usually slight upwards revisions  (1,000 to 3,000) in the numbers of initial claims in most of weeks.  Numbers reported this week also reflected changes in seasonal adjustments announced last week.  (The chart above shows REVISED claims numbers.)

The initial claims as announced last week were 357,000, so the claims from that week were not revised.

Total number of people receiving unemployment insurance is 42.3% of the officially unemployed for the week ending March 16th.

Extended Benefits claims were only available in Alaska during the week ending March 16th.

Therefore, over the last eleven months, 99.9% of the people who were receiving Extended Benefits are no longer receiving such benefits.  We do not know how many of these 440,000 people found jobs, how many have another source of income in the family, and how many have nothing.