Initial Unemployment Claims Rise.. What Does It Mean?

Weekly unemployment initial claims increased by 16,000 this week to 360,000 after decreasing the last two weeks.  Weekly claims continue to be unable to break below a mid 300,000 range of claims, as is obvious from the chart below.

Weekly claims numbers tend to be volatile and weekly seasonal adjustment factors can also throw the numbers off.  This is particularly true  the first two weeks of a quarter when more people generally file for unemployment insurance.  As this past week was the first week of the quarter, we'll have to watch over the next few weeks to see if this week's increase is at all significant.

First time seasonally adjusted unemployment jobless claims increased to 360,000  for the week ending July 6th.   This is an increase of 14,000 claims.  Since the first week of February, new weekly claims have remained in the 325,000 to 365,000 range for nineteen out of the past twenty-two weeks.

The four-week moving average # of claims, which smooths some of the week-to-week volatility, increased by 6,000 last week after decreasing by 500 the week before.  It is now 351,750.  Initial claims continue now at about the same level that they were five years ago, in late 2007 to early 2008.

For the week ending June 22nd, 4,505,508 people were receiving unemployment benefits under one of the programs that are available (regular state, federal extended unemployment compensation, or a few other smaller programs).  This was a decrease of about 52,000  overall claims since the previous week.  The decrease was divided between continuing claims in the Regular State program (the first 19 to 26 weeks of unemployment benefits), which decreased by 21,000,  and continuing claims in the Federal Extended Unemployment Benefits program (the "Tiers"), which decreased  by about  23,000 claims.

About 1,370,000 FEWER people are receiving unemployment benefits now vs. one year ago.  We do not know what has happened to the people who are no longer receiving benefits; we do not know how many of those 1,370,000 people found employment, how many retired, and how many are still looking for work.  We do know that: 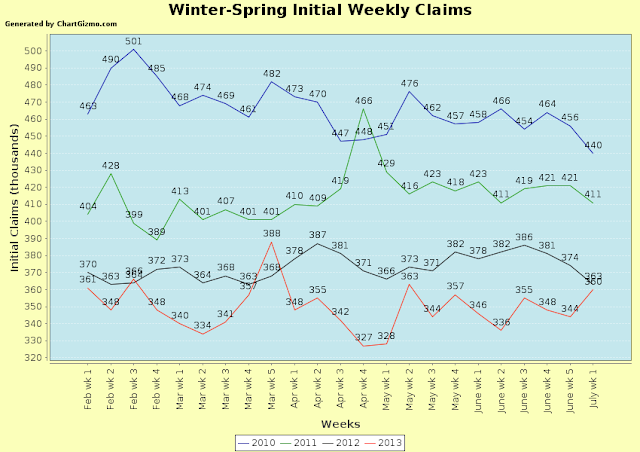 First time unemployment claims increased by 17,000 over those reported last week.  Last week's initial claims numbers were revised upwards by 1,000.  There are usually slight upwards revisions  (1,000 to 3,000) in the numbers of initial claims in most weeks.  (The chart above shows REVISED claims numbers.)

Total number of people receiving unemployment insurance is a very low 36.8% of the officially unemployed for the week ending June 22nd.