Weekly Unemployment Claims Decline Significantly: What does it mean?

Weekly unemployment initial claims decline significantly and hit a new low since the Crash.  Is this meaningful?

What do initial unemployment claims numbers mean?  Are they the same as weekly initial claims?  Why are they important?  HERE!


Weekly unemployment initial claims decreased by 19,000 this week to 326,000 after increasing 9,000 last week.  While weekly claims continue to fluctuate, they are still unable to break below a mid 300,000 range of claims, as is obvious from the chart below.  This is the lowest number of initial claims since the Crash, but it is only lower by 1,000 than the 327,000 claims reported in the week ending April 27, 2013.


As is always true with weekly claims numbers, they are volatile, and we cannot tell if any increase or decrease is significant unless there is a trend over a period of weeks.

First time seasonally adjusted unemployment jobless claims declined to 326,000  for the week ending July 27th, a decrease of 19,000 claims.  Since the first week of March, new weekly claims have remained in the 325,000 to 365,000 range for twenty-one out of the past twenty-two weeks.

The four-week moving average # of claims, which smooths some of the week-to-week volatility, decreased by 4,500 last week after decreasing by 750 the week before.  It is now 341,250.  Initial claims continue now at about the same level that they were five years ago, in late 2007 to early 2008. 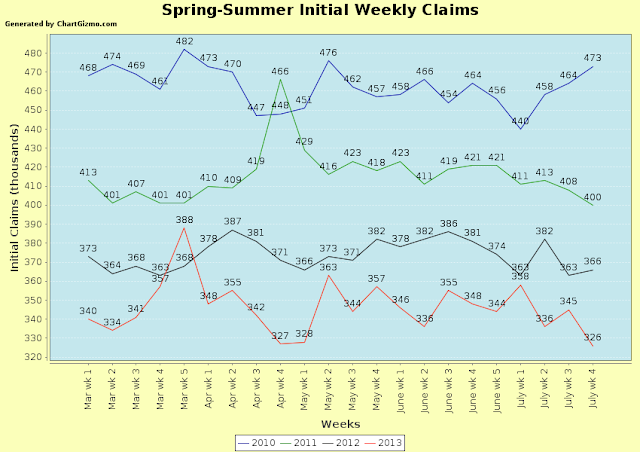 Be aware that:
For the week ending July 13th, 4,695,366 people were receiving unemployment benefits under one of the programs that are available (regular state, federal extended unemployment compensation, or a few other smaller programs).  This was a decrease of about 154,140  overall claims since the previous week. The decrease was due mostly to a drop of 99,577 claims in the number of people receiving benefits in the Regular State program (the first 19 to 26 weeks of benefits).  The number of people receiving benefits under the Federal Extended Benefits program (the "Tiers") dropped about 50,000.


About 1,200,000 FEWER people are receiving unemployment benefits now vs. one year ago.  We do not know what has happened to the people who are no longer receiving benefits; we do not know how many of those 1,200,000 people found employment, how many retired, and how many are still looking for work.  We do know that:

First time unemployment claims decreased by 17,000 over those reported last week.  Last week's initial claims numbers were revised upwards by 2,000.  There are usually slight upwards revisions  (1,000 to 3,000) in the numbers of initial claims in most weeks.  (The chart above shows REVISED claims numbers.)

Total number of people receiving unemployment insurance is a very low 38.3% of the officially unemployed for the week ending July 13th.