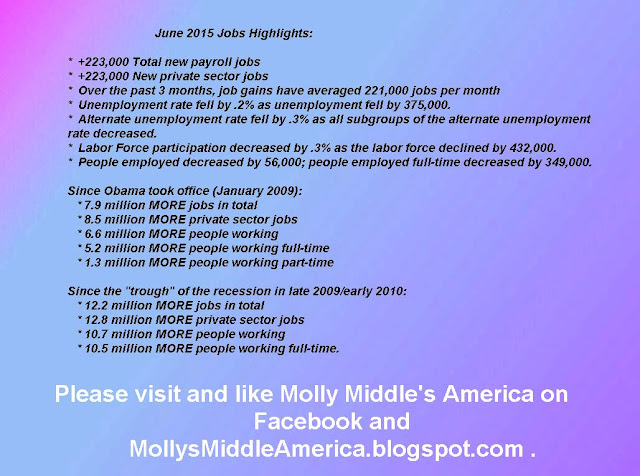 June 2015 reports: (Notation on the links will be changed to "UPDATED for JUNE" when the updated reports become available.)

This is one of those rare job reports that are published on a Thursday instead of a Friday, and very early this month due to the July 4th holiday.  The pundits and prognosticators are predicting good jobs numbers for June when the BLS releases that report tomorrow morning, July 2, at 8:30 a.m. Eastern time.

Due to the holiday, this preview will be short.

According to a Reuters survey of economists, nonfarm payrolls likely increased 230,000 in June after a robust 280,000 gain in May. The jobless rate was forecast dipping one-tenth of a percentage point back to a seven-year low of 5.4 percent.

2. ADP: The private payroller ADP estimates that 237,000 more private-sector jobs were created in June 2015.  ADP estimated increases in all sectors, and a reasonably fat increase in manufacturing.

3.  The June Consumer Sentiment index compiled by the University of Michigan  showed a jump from 90.7 in May to 96.1 in June.

Consumers voiced in the first half of 2015 the largest and most sustained increase in economic optimism since 2004. Just as important, that same record was set by households in the top third of the income distribution as well as by the middle third and those in the bottom third of the income distribution. Moreover, the recent surveys recorded those same records when consumers were asked to evaluate prospects for the national economy, their personal finances, and buying conditions. Consumer spending will remain the driving force of economic growth in 2015. Overall, the data indicate growth in consumer spending of 3.0% in 2015.

4.  The search engine Linkup.com was much higher than the other pundits:

Based on the strong gains in new and total job openings on LinkUp’s job search engine in May (which rose 15% and 7% respectively), we are forecasting a net gain of 350,000 jobs in June – well above Bloomberg’s consensus forecast of 234,000 jobs.