The August 2016 Jobs Report was released by the government's Bureau of Labor Statistics Friday morning, September 2.  It showed steady though unspectacular jobs and employment growth.

This report is outdated.  Current numbers (for November 2016) can be found at the link above. 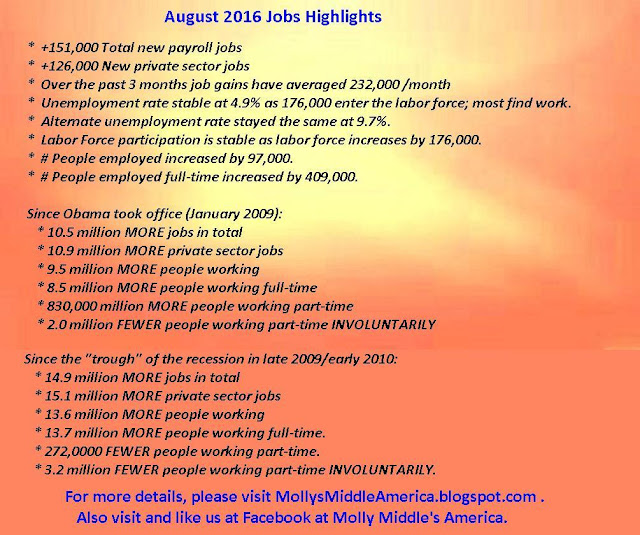 From the BLS report:


August 2016 reports: (Notation on the links will be changed to "UPDATED for August" when the updated reports become available later today or over the weekend.  Not all reports are updated every month.)

Expectations and the ADP Report:

The pundits were expecting job growth in the vicinity of 180,000 new jobs.  The ADP report, which was released Wednesday, August 31st, showed an increase of 177,000 private sector jobs.  Over time, the numbers in the ADP report tend to follow those in the BLS government report very closely.  In the ADP report, Mark Zandi, chief economist of Moody's Analytics, said:

The American job machine continues to hum along. Job creation remains strong, with most industries and companies of all sizes adding solidly to their payrolls. The U.S. economy will soon be at full employment.