First time unemployment claims were the same as reported last week, though the four-week moving average has decreased by 5,500.  Claims have been stable this spring, as seen on the attached chart.
Check out the red line on the chart below to see where jobless claims are now, in spring of 2012, compared to spring of the past two years.

The initial claims as announced last week were 370,000, so the claims from that week were revised upwards by 2,000. 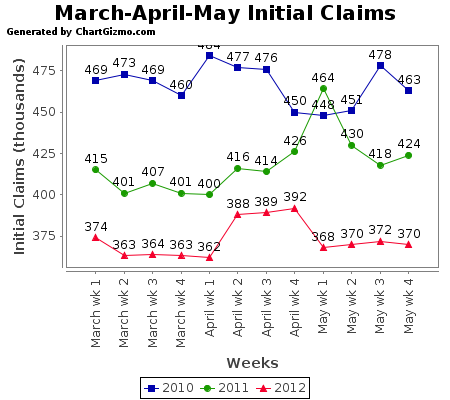 The chart above is one of the BEST charts for understanding and observing changes in the weekly initial claims numbers over time.  This year (red-2012) and the past two years (green- 2011 and blue- 2010) are marked in different colors.  You can see that, as a trend, first time claims for unemployment have gone down SIGNIFICANTLY from one year to the next, even though there are variations within the year.


Be aware that:  1.  These are first time claims, so people who have continued to receive benefits or who are losing any unemployment benefits would not be counted in these numbers.  2.  They are seasonally adjusted, so most variations caused by weather or holidays are already included in these numbers.  3.  As these are weekly numbers, they are more volatile than the monthly numbers.
You an also see that the April bulge, visible during the 1st-2nd week of April in all three years, has ended in 2012, with a return to first time claims levels of March.  As a comparison, the initial claims in April were around 260,000 in the year 2000, and about 300,000 in 2006 and 2007.  The current numbers of initial claims are the lowest springtime initial claims numbers since 2008.

Any questions or confusion, please leave a comment or email me!
Posted by Middle Molly at 8:45 AM