What Was the Unemployment Rate When Obama Took Office? (April 2012 update)

What Was the Unemployment Rate When Obama Took Office Compared to Now? (November 2015 update)

The following numbers are outdated.  For current numbers, please click the above link. 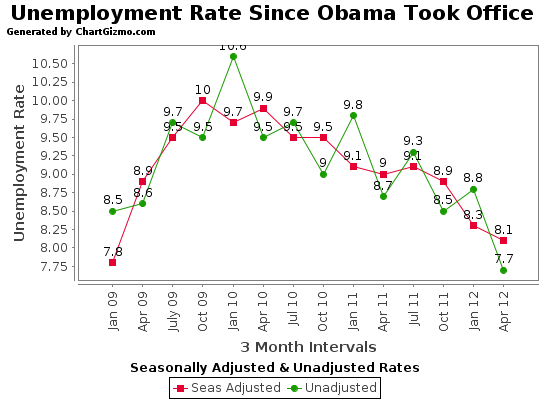 This was a question I received, and I thought I would answer it here.

That's why we say that Obama inherited a rapidly-increasing unemployment rate.  Why did it continue to rise after Obama took office?  It takes a while for any government policy to take effect.  Both TARP, the bank bailout signed by Bush in late 2008, and ARRA, the stimulus signed by Obama in February 2009, needed time to take effect, and that simply did not happen immediately.  How long does it take to turn around the proverbial airline carrier vs. a speed boat?  However, even though it took 9 months for the unemployment rate to max out (see below) and start decreasing, the rate of increase slowed down by June 2009.

The question, "What Caused the Rise in the Unemployment Rate After Obama Took Office?" really makes no sense...  The unemployment rate was rising rapidly before  Obama took office, and it took a few months for policies to kick in and stem the job bloodbath.   A better question would be "What Caused the Rise in the Unemployment Rate Starting in 2007?"   The answer to that would be the housing crisis and the resulting crisis in banks and lending institutions.  But that is outside the scope of this article.

(Note:  All of my employment number reports are based on monthly reports and data published by the Bureau of Labor Statistics.  Monthly numbers reports are based on the monthly Employment Situation Report.  The Employment Situation report includes month over month and year over year jobs numbers.  My analysis is taken from the monthly BLS data copied to an Excel spreadsheet every month.  I calculate detailed percentage increases/decreases, 3 month numbers, 2011 to date numbers, and I compare jobs numbers to those at the time of Obama's inauguration and at the "trough" of the recession.)