Unemployment is lower and employment is higher than it was in 2011!  All measures of underemployment are lower than they were in 2011 as well.
This is an example of how misleading the media can be.  I see so many searches on "jobs lost in 2011" or "number of jobs lost so far in 2012."

No, it is not.  Keep watching this blog for more information about the supposed "true" unemployment rate in the next few days.   And ponder a bit:  If you were counting the unemployed, who would you count as unemployed?  Who would you not count as unemployed?  Would you only count people looking for work?  In the last month?  In the last year?  Would you count retired people?  Kids in high school?  Parents at home with children?  Disabled people?
Here's a little graph on the various "pieces" of employment and unemployment and how they compare for the months of April and October for the past four years: 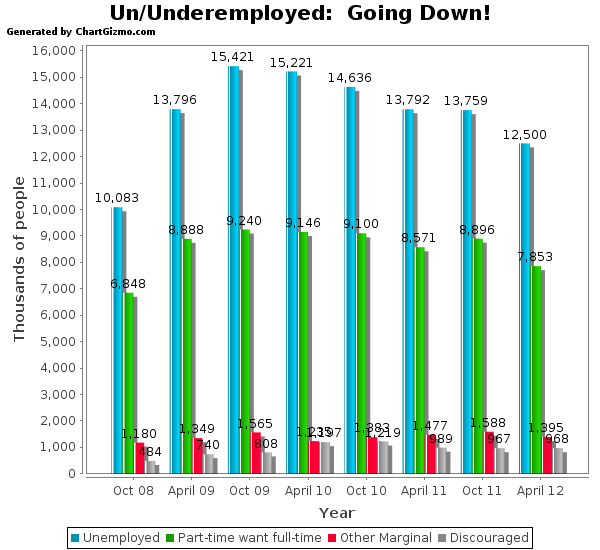 Well, yeah.. How about that?

People ARE leaving the labor force, but there is no indication that millions of them are dropping out due to discouragement.  The largest number of people dropping out of the labor force are people 55 and over, most of whom are probably retiring.  More about this as well in the coming days.

Let's look at the above chart.  These are the "pieces" of the labor force that create the U-6 alternate un/underemployment rate.