Initial Jobless Claims For the Past Four Years: How Quickly We Forget!

Look at how much our weekly initial unemployment (jobless) claims have decreased since those months shortly after Obama was inaugurated:

(See the August update at the bottom of this post.) 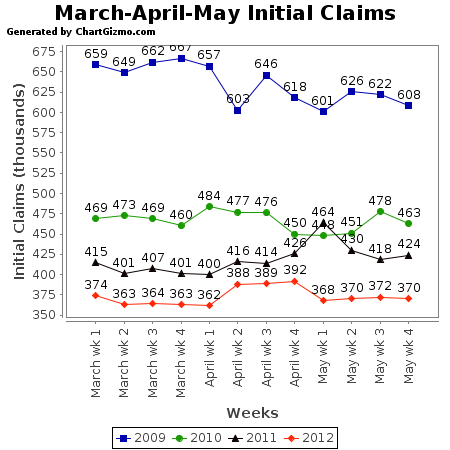 Things were pretty intense in late 2008/early 2009.  If you've forgotten, a quick look at this graph should refresh your memory.  (And weekly initial claims were already decreasing by the first week of March 2009, just a week or two after the ARRA stimulus was passed!)

Check out the red line on the chart above to see where jobless claims are now, in spring of 2012, compared to the springs of the past three years, especially spring of 2009 (blue line).
The charts I include in my weekly initial unemployment claims articles are among the BEST charts for understanding and observing changes in the weekly initial claims numbers over time.  This year (red-2012) and the past three years (black- 2011, green- 2010, and blue- 2009 ) are marked in different colors.  You can see that, as a trend, first time claims for unemployment have gone down SIGNIFICANTLY from one year to the next, even though there are variations within the year.

Update as of mid-August: 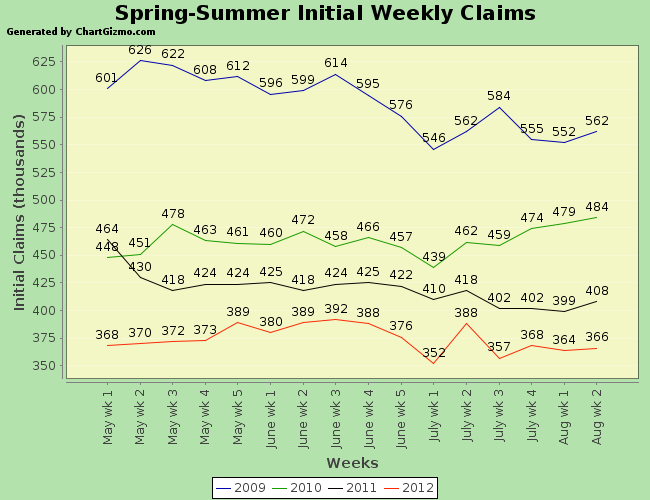