He was found in an "affluent" suburb, not in a cave..


Wow! Obama is taking credit for this even though it happened during Donald Trump's show.  (From Rep. Jack Kimble.)


Obama had no fewer than 5 national security briefings on this operation.


A lot of people across from the White House.. More and more!  I also heard that people are gathering at Ground Zero, Horns in New York City.  Quiet here,
but we aren't downtown Chicago.  A scene from Ground Zero in NYC:


Joshua Jeffrey.. the first poster at Huff Po to call it while everybody was
speculating as to what the press conference was going to be about. Good job!


Other craziness:  Someone (Alex Jones?) claiming that Bin Laden was frozen years ago!

Also, a rumor out there that Osama tried to use a woman as a human shield.


Navy Seals slipped into Pakistan, smoked out Osama Bin Lade, and got out without any casualties!  Great work, men!  (From a Navy vet wife.)


From the CNN blog:

CNN's Chris Lawrence, citing U.S. officials, reports that the compound where bin Laden was found - in Abbotabad, Pakistan, about 100 kilometers outside Pakistan's capital of Islamabad - was three stories tall, and about eight times larger than any of the buildings around it.

An official said a "small U.S. team" was involved in the operation at the compound - the official would not confirm any U.S. military involvement. An official said bin Laden resisted the assault - and was killed in the firefight.

A U.S. helicopter crashed during the raid because of mechanical reasons, an official said. It was destroyed, the officials said.


According to U.S. officials, two U.S. helicopters swept into the compound at 1:30 and 2:00 a.m. Sunday morning. Twenty to 25 U.S. Navy Seals under the command of the Joint Special Operations Command in cooperation with the CIA stormed the compound and engaged Bin Laden and his men in a firefight, killed Bin Laden and all those with him.

Two Bin Laden couriers were killed, as was one of Osama Bin Laden's son, as was a woman reportedly used as a shield by one of the men. Other women and children were present in the compound, according to Pakistani officials, but were not harmed. U.S. officials said that Bin Laden himself did fire his weapon during the fight.

One of the U.S. helicopters was damaged but not destroyed during the operation, and U.S. forces elected to destroy it themselves with explosives.


Obama from day one wanted a plan to get OBL. Effort was significantly ramped up vs previous administration."

And, last but not least, as we move away from this blog entry assuring you that it appears that Osama Bin Laden is still dead (other than the Alex Jones Koolaid drinkers, that is), you can get your own "Osama Bin Laden is Still Dead" T-shirts from our friends at ProgressWear: 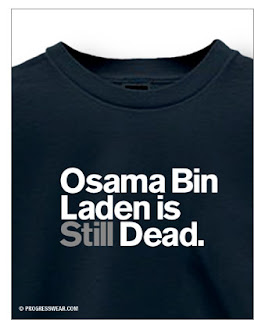 While you are here, don't miss:
Crushing the human spirit indeed!
Posted by Middle Molly at 11:23 PM